Change in Analysis: Components to Files

Background
Before we address the change from components to files, it is important we understand what components are and why did we choose to analyze components in the 1st version of Embold.
In object-oriented programming, Class is the most important building block. It is the blueprint for creating data structures and implementations of member functions or methods. The design of code is dependent on how classes interact with each other.
In the first version of Embold, we called classes, interfaces and structures as components which basically is just a container. In this article, class and component will be used interchangeably.
Though component-based analysis worked well with object-oriented languages, it started showing some flaws when we introduced support for C and for scripting languages like JavaScript and Python. In these scripting languages developers started using files more than classes whereas in language like C, classes were mostly used only as placeholder eg. Structures.
To handle these cases, we introduced a virtual component which acted as a container to which all File level variables or methods are attached. But as we added support for more languages, it became more and more apparent that we needed to change the way we represented the analysis.

Analysis of files instead of components
In the new version of Embold, we perform the analysis on files rather than components. There is also some changes in how the analysis is represented on the UI.

Earlier all Ratings (Overall, Design, Metrics, Code Issues, Duplication) were calculated at a component level. Despite the fact that issues and duplication are physical attributes, they had been tagged to components through a complex calculation.
In the new version of Embold, components have only Design and Metrics ratings whereas files have all 5 ratings. Design or Metric rating for a file is calculated on a pro rata basis (based on LOC) if that file contains a part of component(s).

In the new version of Embold, the occurrences of antipatterns where class level dependencies occur and if class is accessing File level variables/functions has reduced considerably. Take the example of feature envy.
Feature Envy depends on how many member variables of a component are accessed directly from a particular function. File level global level variables should be accessed directly and are not termed as accessing class level member variables directly. However, as it was treated as a Component and its members were Global Functions/Variables, such variables were used to calculate Feature Envy Antipattern. With the new approach, such variables won’t be treated as member variables and so number of Feature Envy antipatterns reported will reduce.

Before this change, the UI had components page and that was the entry point. But it was hard to see data at File level. Clicking on any component, you would be redirected to the code view page, where it would show the files containing that component. The metrics and Anti Patterns on the top row were related to the Component.

Analysis based on components

Analysis based on files

Screenshot 2022-03-21 at 5.31.26 PM3355×1611 362 KB
Now with this change, we will see Files listed instead of components and clicking on any file, you will be redirected to the code view of that file. The metrics and anti patterns will be at file level. But if you go to the component inside the file, you will still be able to see component level metrics. That data is not lost.

Metrics are now calculated at component level as well as at file level. 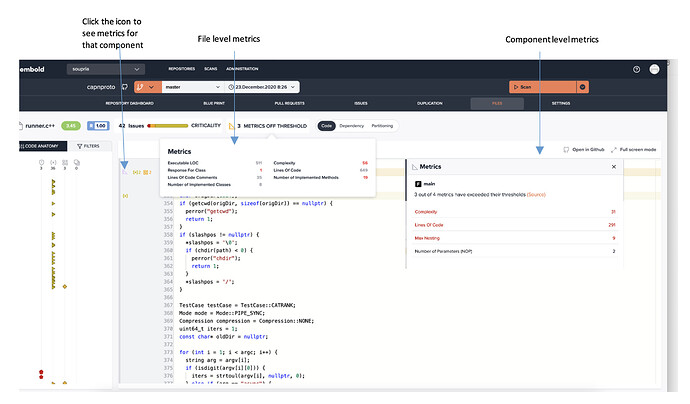 We are still making improvements in File level representation and analysis data. We are in the process on adding more file level Anti Patterns and metrics. We will also be adding a new metrics page where you will be able configure metric thresholds. So stay tuned!